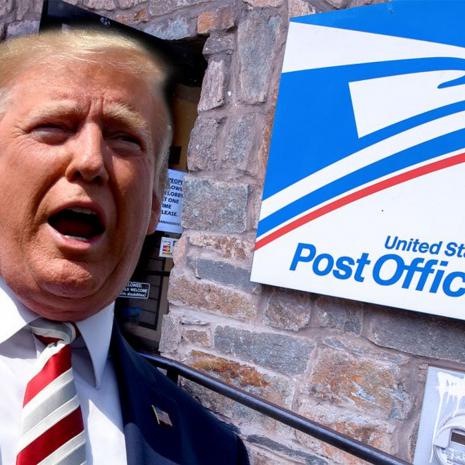 The New York Times is all but accusing the president of withholding funds from the Post Office so as to undercut voting by mail, which he sees as being riddled with fraud. A spokesman for the Biden campaign put it this way:

The president of the United States is sabotaging a basic service that hundreds of millions of people rely upon, cutting a critical lifeline for rural economies and for delivery of medicines, because he wants to deprive Americans of their fundamental right to vote safely during the most catastrophic public health crisis in over 100 years.

Senator Bernie Sanders (I-Vt.) was even more adamant: "I am not exaggerating when I say this is a life-and-death situation. The Post Office is delivering medicine to millions of Americans during a pandemic. It delivers Social Security checks to seniors who rely on those benefits to survive." This, of course is nonsense, as is most of what Sanders says. Over 99 percent of Social Security payments are sent via direct deposit. And mail prescriptions only make up only 5.8 percent of the prescription drug market.

The Post Office has a problem, but the problem has existed since long before Trump was elected. The United States Postal Service (USPS) lost almost $9 billion last year. It has lost $83.1 billion since 2006. Its unfunded pension and health-care liabilities exceed $120 billion.

The Post Office has a pricing problem. Revenue from first-class mail—the biggest source of the USPS's revenue—continues to decline even as labor costs continue to increase. Of the 142.6 billion pieces of mail that the Post Office handled in 2019, "53 percent was advertising material, a.k.a. junk mail, up from 48 percent in 2010." And "companies pay a special rate, 19 cents apiece, to send these items (in bulk), as opposed to the 55 cents for a first-class stamp."