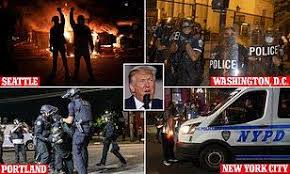 In a five-page memo sent to federal agencies on Wednesday whose subject is "Reviewing Funding to State and Local Government Recipients of Federal Funds That Are Permitting Anarchy, Violence, and Destruction in American Cities" and signed by Trump, the president orders them to report to the White House Office of Management and Budget on any funding that could be redirected. New York City, Portland, Seattle and even Washington, DC are among the initial targets of the measure.

"My Administration will not allow Federal tax dollars to fund cities that allow themselves to deteriorate into lawless zones," Trump says in the memo, which mentions New York Mayor Bill de Blasio by name twice. To ensure the federal funding is not wasted or "spent in a manner that directly violates our Government's promise to protect life, liberty, and property, it is imperative that the Federal Government review the use of Federal funds by jurisdictions that permit anarchy, violence, and destruction in America's cities."

In a tweet late on Wednesday, Trump followed up the memo by saying that his administration "will do everything in its power to prevent weak mayors and lawless cities from taking Federal dollars while they let anarchists harm people, burn buildings, and ruin lives and businesses. We're putting them on notice today."