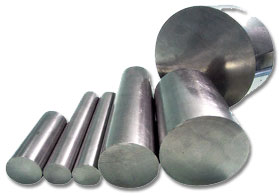 They also possess excellent mechanical strength and resistance to thermal creep or a permanent deformation under constant load at high temperatures. Additionally, they offer good surface stability and excellent resistance to oxidation. Superalloys achieve their high-temperature strength through an alloying process known as solid solution strengthening where the solute atom is large enough that it can replace solvent atoms in their lattice positions while leaving the overall crystal structure relatively unchanged. The casting process is especially important in the production of heat-resistant superalloys such as those used in aircraft engine components.

- Aggregated Diamon Nanorods -
Some materials resist this deformation and break very sharply, without plastic deformation, in what is called a brittle failure. The measure of a material's resistance to deformation, particularly in a localized manner is its hardness.

Diamonds have always been the standard for hardness, being the hardest material known to man. X-ray diffraction analysis had indicated that ADNRs are 0.3% denser than standard diamonds, giving rise to their superior hardness.

Testing performed on a traditional diamond with an ADNR tip produced a hardness value of 170 GPa. Still, it's speculated that ADNR's hardness on the Mohs scale could exceed 10, the rating of a diamond.

- Delo Monopox VE403728 -
The way we utilize the properties of materials tends to occur in plain sight. Adhesives by definition are any non-metallic substance applied to one or both surfaces of two separate materials that bind them together and resist their separation. Sometimes referred to as glues or cement, they are one of the earliest engineering materials used by man.