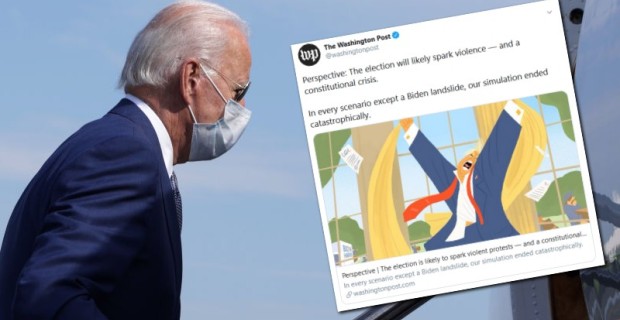 The Washington Post has published an article asserting that the election result will "spark violence" unless it's a Biden landslide, prompting some observers to view the prediction as a threat.

"The election will likely spark violence — and a constitutional crisis. In every scenario except a Biden landslide, our simulation ended catastrophically," tweeted the newspaper.
This prompted numerous commentators to question the logic behind such a forecast.

On Monday, Biden himself suggested that the violence plaguing American streets will continue unless voters elect him, tweeting, "Does anyone believe there will be less violence in America if Donald Trump is reelected?"

As we highlighted on Tuesday, a polling firm with direct ties to the Biden campaign and the DNC says that it's likely President Trump will appear to have won in a landslide on election night but may lose after mail in ballots are counted, which "will take days if not weeks to tally."

With Hillary Clinton urging Joe Biden not to concede and Facebook revealing that it refuse to call the election result 'prematurely', many Trump supporters now fear that the political class will try to filibuster the election outcome in yet another attempt to subvert the Trump presidency.