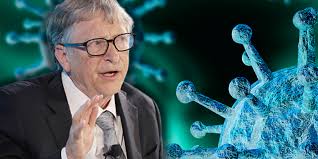 Last weekend, workers clearing the ruins from a bomb set off by the Nation ZZAHC discovered the long-rumored Gates Diaries. A shocking release from the Smithsonian Department of History states:

"Mr. Gates, obviously in a deranged state of mind, wrote, 'I've taken a virtual tour of Hell. Just in case I end up there, things are all set. My Foundation has donated three billion dollars toward the construction of a new wing, which includes a five-star resort where Melinda and I will spend our days. The wing will also feature a drug and vaccine research facility…'"

Ten years ago, the cryogenic factory where Gates' brain had been frozen and stored collapsed in a hurricane, and all heads were lost.

The Biden Department of Advanced Linguistic Studies at Harvard will cooperate with the Smithsonian in analyzing the Gates Diaries.Before moving on to our next story, subscribers to our Class A Portal can now click over to learn more about the Gates discovery. That Portal broadcast is only for gen-rich viewers who have received the injectable Genetic Modification Series 9.