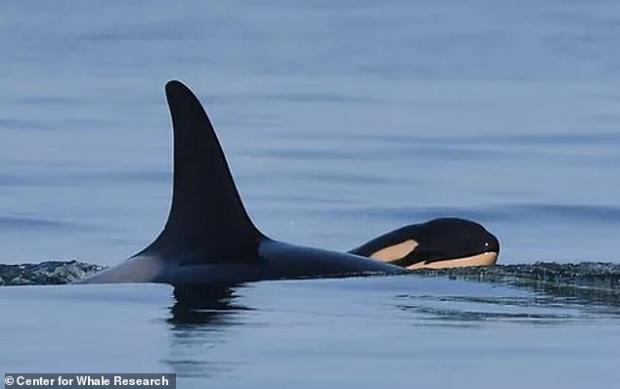 An orca named Tahlequah who touched the hearts of people around the world in 2018 after she carried her dead calf for 17 days has given birth to a new baby.

The 21 year-old orca — or 'killer whale' — gave birth on September 4 to her new calf, dubbed 'J57' by researchers, in the eastern Strait of Juan de Fuca in US waters.

According to the Whale Research Center, Tahlequah and her new calf appear to be healthy with the infant 'swimming vigorously alongside its mother'.

Tahlequah gave birth to one calf in 2010 who survives to this day — 'J47', also known as 'Notch' — but she also miscarried a calf in mid-2010 before losing the 2018 calf soon after birth. Experts feared she was likely also lose this new one.

Her pregnancy was first reported by whale watchers in July after experts from the Sealife Response, Rehabilitation and Research conservation group spotted that she was larger than usual.

'We hope folks on the water can give the Southern Residents plenty of space to forage at this important time. With such a small population every successful birth is hugely important for recovery,' the nonprofit group wrote at the time.

So it came as a relief to experts when J57, yet to be given a common name by the research team, was born between Washington State and Vancouver Island.