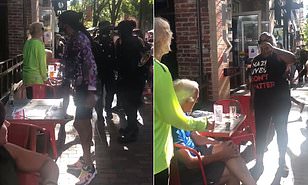 Cellphone footage shows the crowd taking over the outdoor dining space with one person even approaching the older couple's table before drinking their beer in front of them; another smashed a glass from a table.

One protester tells the diners: 'F**k the white people that built the system.' He adds: 'F*** 12'; a reference to police. Others eating at the restaurant pick up their belonging and leave after demonstrators call them an 'embarrassment'.

The demonstrations are in response to several black Americans who have died in police custody, with the recently shared footage of the death of Daniel Prude in Rochester, New York in March, sparking the new wave of outrage.

Similar scenes have played out across the county with a diner in Washington D.C. last week cornered by a group of anti-racism protesters outside a restaurant. In another incident, diners in Rochester were also confronted by a large group of demonstrators.

'We're shutting your party down,' one woman was seen shouting in the face of a New York diner as demonstrators smashed the customer's glasses in front of their faces, broke plates, overturned chairs and chanted at them to get out.

A second video taken in Pittsburgh over the weekend shows a demonstrator speaking with a megaphone while walking next to a cyclist. It's unclear what is said, but the demonstrator nudges the cyclist with his megaphone. The cyclist swats the demonstrator in response, but a second protester hits the man from behind.