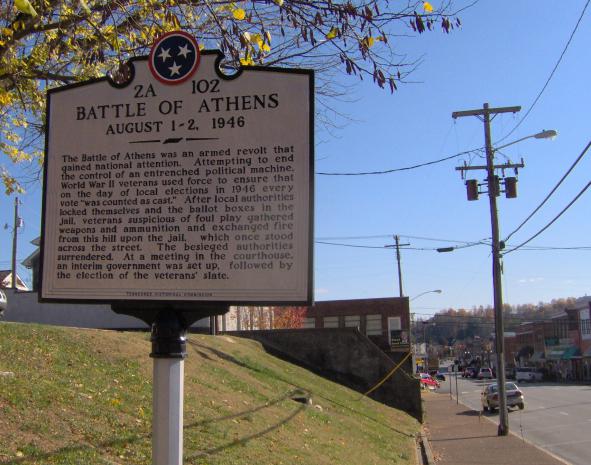 These brave men embodied that irrepressible Southern spirit, that martial valor and moral sublimity that suffused the souls of Dixie and her children for generations upon generations, stretching backwards in time through the annals of Indo-European civilization — that constitution which we fervently hope has not drained from our blood forevermore. The Battle of Athens stands, then, as a monumental event in the history of Southern, and thus Western, civilization, the fulfillment of an ancestral promise; so, too, does the Battle of Athens represent a call echoing through the ages to fall on modern ears that must not remain deaf — a call to actualize the destiny that our forefathers spilt so much blood, both their own and their enemies', to leave to us.

Athens is the seat of McMinn County, which, at the time, was the nerve center for Sheriff Paul Cantrell, a major lieutenant of a corrupt Democratic machine which stretched from Tennessee to the District of Columbia. Though we will eschew labeling Cantrell or his machine politics "evil," as this was simply the way things were done in many American polities, it is worth noting that before and especially during the Second World War, Cantrell presided over corruption and graft on an industrial scale. As Chris DeRose details, the Sheriff drew salaries of nearly sixty thousand dollars per year over his first six years that were worth well over one million dollars in today's purchasing power. He was also appointed superintendent of the county workhouse for an additional salary of over two thousand dollars; DeRose notes that "McMinn County did not have a workhouse, making its superintending easy." This at a time when the median Tennessee home was worth less than two thousand dollars and the starting salary for enlisted men was fifty dollars per month. Despite strict rationing, McMinn machine men never wanted for cars, tires, or fuel. Illegal casinos, speakeasies, and whorehouses payed thousands of dollars per month in protection money. Dozens of county employees were listed on the payrolls for the sole purpose of providing cover for a vast money laundering operation.