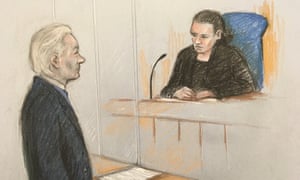 In a few weeks or months, Judge Vanessa Baraitser will rule on whether Julian Assange can be taken to the United States to face a string of serious espionage charges, so it's probably a good idea for him to stay in her good graces.

But on Tuesday, the second day of the WikiLeaks founder's extradition hearing in London, which was delayed for months by the coronavirus pandemic, Baraitser delivered a forceful warning to Assange that he will be removed from court for good if he can't keep his thoughts to himself while witnesses are delivering their evidence.

Assange reportedly shouted out "nonsense" during the hearing when the lawyer representing the U.S. told a witness that the WikiLeaks founder was facing extradition not for handling leaked documents but for releasing the names and endangering U.S. informants.

Clearly displeased by his outburst, Baraitser told Assange, who was in the dock, that he must not speak out even when he inevitably disagrees with the position of the prosecution team.

"If you interrupt proceedings and disrupt a witness who is properly giving their evidence, it is open to me to continue without you in your absence," Baraitser told Assange. "This is obviously not something I wish to do. I am, therefore, giving you a clear warning."