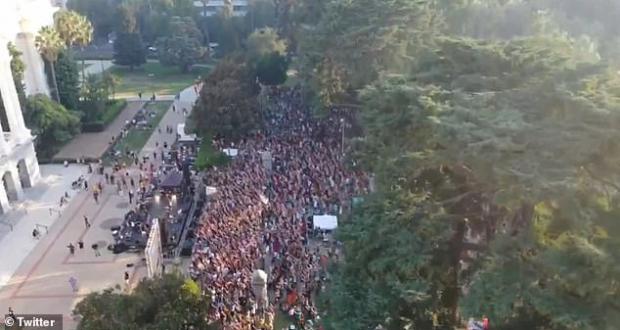 A pastor has shared video of what he claims were 12,000 people at a service on the California State Capitol grounds Sunday.

Sean Feucht posted drone footage of the event, showing thousands of people gathered, where few appear to be wearing masks or socially distanced. The California Highway Patrol had issued a  permit for the event for 1,000 people.

There is no longer a limit on how many people can attend in-person protests but those attending should practice social distancing, according to guidance.

But Feucht, who is connected to the Bethel Church in Redding, said: 'Official Capitol Hill police estimate was 12,000 tonight in Sacramento!!!  GOD IS NOT DONE WITH CALIFORNIA!!! #LetUsWorship.'

Jaime Coffee, public information officer for the CHP, had a lower estimate for the attendance, saying 3,000 people were there.

He added: 'The majority of the participants gathered on the west steps and failed to socially distance.

'Prior to the event start, the Capitol Permit Officer indicated those who were showing up at the Capitol were socially distancing. Additionally, the permit officer was walking around the crowd verbally reminding people.