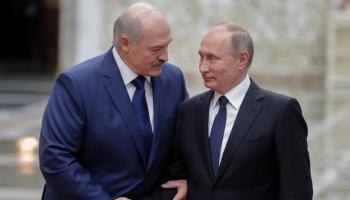 He's actually been seen walking the presidential compound grounds in combat fatigues while holding an automatic rifle, to show just how serious he is about resisting the unrest increasingly at the gates of his residence.

But on Tuesday he showed the first signs he might be willing to compromise as both domestic and international pressures grow toward holding a fresh election. The opposition claims the Aug.9 election was "rigged" as exiled opposition leader Sviatlana Tsikhanouskaya urges "international pressure on this regime" while issuing regular messages from neighboring Lithuania

Lukashenko was quoted in Interfax as saying Tuesday that he may have "overstayed" his time in office and that he would "not exclude early presidential elections" in a significant first sign of possibly softening his stance.

However, he underscored in the comments that he remains the only leader capable of carrying out any need reform, saying the possibility of a rerun of the contested election would only be accomplished after constitutional reform takes place.

"We are ready to carry out the reform of the Constitution; after that I do not exclude early presidential elections," Lukashenko said according to Interfax news agency.