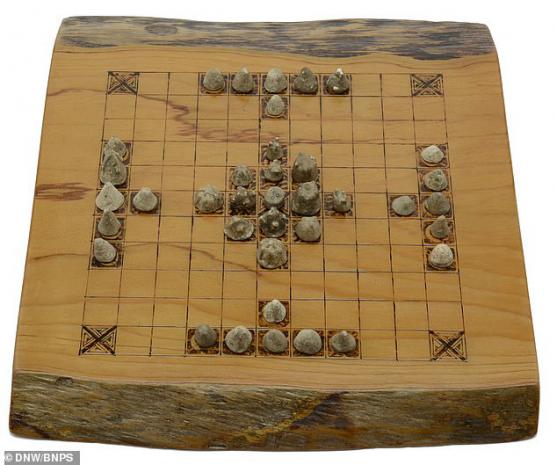 A rare complete set of Viking gaming pieces has been put up for sale after being discovered in a field by a metal detectorist.

Retired miner Mick Bott, 73, made the find at a site in Torksey, Lincolnshire, where the Vikings formed a winter camp in AD 872.

The camp was used as the Vikings' defensive and strategic position during the winter months as they prepared to conquer England.

The pieces were part of a strategic board game called Hnefatafl, which is similar to chess and was popular with the soldiers in teaching strategy on the battlefield.

The set is expected to sell for £1,000 when it goes up for auction at London-based Dix Noonan Webb (DNW) next Tuesday, September 15.

One of the experts at DNW said the detectorist brought the Viking gaming pieces into the auction house in a plastic bag, unsure of their significance.

Bott had been collecting items for two decades at the site, and had also found coins, strap ends, brooches, mounts and lead weights dating to the 9th century.

'He thought they were weights but I have been to Oslo Museum and seen examples of Viking games and these pieces resembled that,' said Nigel Mills at DNW.

'I weighed them all and none of them were the same – they were all different.'

After closer inspection of the lead weights and comparing them to similar shaped stone examples in the Oslo Museum, it became evident they were Hnefatafl pieces.

Mills told MailOnline the set 'is like a time capsule'.