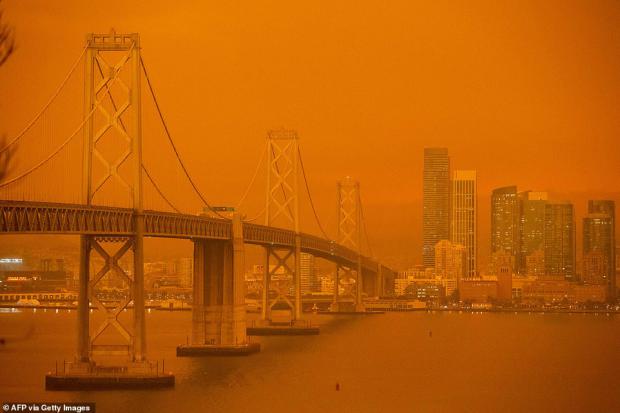 Blazes are spreading in California, Oregon and Washington - killing at least seven and leaving dozens missing

Wyatt Tofte, 12, and his grandmother Peggy Mosso, died in a wildfire near the Santiam Valley in Oregon

In California, at least three deaths have been reported with three in the Bear Fire near Sacramento

Barack Obama tweeted about the fires Wednesday, saying the effects of climate change are clearer than ever

Dramatic aerial images captured the massive destruction wrought by wildfires in California, Oregon and Washington which have killed at least seven people including a 12-year-old boy and his grandmother.

Ninety major fires across 13 western states have already burned more than 3.4 million acres - the size of Connecticut - and are still spreading in high winds amid fears that the number of casualties will rise.

'This could be the greatest loss of human lives and property due to wildfire in our state's history,' Oregon Gov Kate Brown told a press conference.

'This fire is just burning at an explosive rate,' said Daniel Berlant, a spokesman for California's state fire authority. 'You add the winds, the dry conditions, the hot temperatures, it's the perfect recipe.'