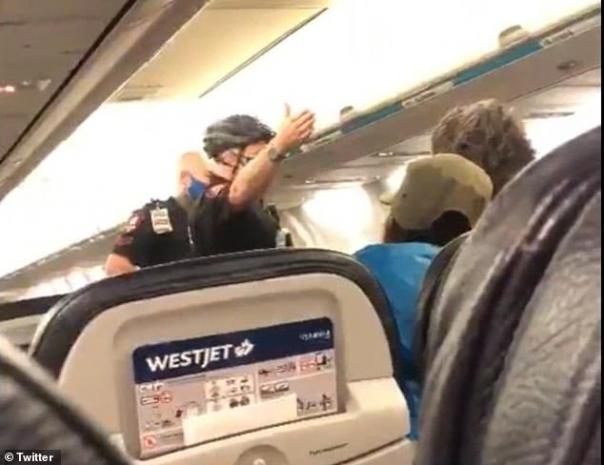 Passenger Safwan Choudhry was traveling with his wife, three year-old-daughter Zupda and nineteen-month-old daughter Zara when the mask dispute arose with flight crew and police were called to remove the family from the plane.

Choudhry claims staff were trying to force him to put a face mask on his nineteen-month-old child even though she fell under the two year age limit.

Video footage of the incident shows uncomfortable scenes as a child is heard crying and Choudhry argues with police officers at being forced to leave the plane.

As the incident escalated, flight crew said they were concerned about the behavior of other passengers and uncomfortable continuing the flight, which was then canceled.

Yet WestJet has disputed the family's claims, stating that the flight crew had been concerned about Choudhry's three-year-old daughter who had to wear a face mask.

A spokesperson confirmed to CBC that Flight 652  was canceled Tuesday and that crew were aware of which children on the plane were under two, as it is tracked in the flight log.

'WestJet would like to clarify that there were two children, and we were not requiring the infant to wear a mask, but did require the other child, who is over age two, to wear one,' WestJet spokesperson Lauren Stewart said.