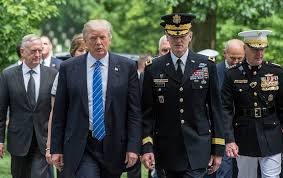 Trump said that the Pentagon brass don't love him, "because they want to do nothing but fight wars so that all of those wonderful companies that make the bombs and make the planes and make eveything else stay happy."

President John F. Kennedy was assassinated by the military/security complex for making the same point (see, for example, JFK and the Unspeakable by James W. Douglass, Simon & Schuster, 2008).

The US military/security complex has had its crosshairs on Trump since his first presidential campaign when he said that he was going to normalize relations with Russia.  I don't think Trump realized what a massive NO-NO this is.  Trump was telling the military-security complex that he was going to take away their concocted enemy that justifies the lucrative $1,000 billion annual budget paid by American taxpayers.

This enormous sum enriches a large number of companies along with the CIA's power and budget. To tell a powerful institutionalized force that you are going to take away their justification for diverting increasingly scarce American resources into their bank accounts is to ask for assassination. President Trump is in the process of being assassinated, but it is not by bullets. Not even dumbshit Americans will believe another "lone assassin" story.  Trump is being assassinated with a coup—https://www.paulcraigroberts.org/2020/09/08/democrats-have-planned-a-coup-if-trump-wins-reelection/ .