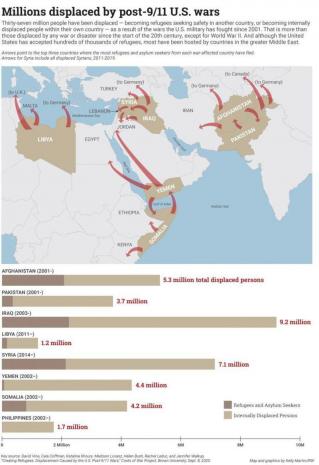 "The wars the U.S. government has fought since the attacks of Sept. 11, 2001, have forced 37 million people — and perhaps as many as 59 million — from their homes, according to a newly released report from American University and Brown University's Costs of War Project," the report introduces.

It's being called "the first calculation of its kind" given neither the Pentagon, nor State Department or any other federal agency has kept track of the mass displacements.

The study identifies that out of this 39 million total, eight of the most violent wars and 'counter-insurgency campaigns' are responsible for the vast majority of displacements. They are Afghanistan, Iraq, Libya, Pakistan, the Philippines, Somalia, Syria and Yemen.

These wars were executed or overseen either by the Bush, Obama, or spanning into the Trump administration.

To drive home the magnitude, The Quincy Institute underscores that "Displacing 37 million people is equivalent to removing nearly all the residents of the state of California or all the people in Texas and Virginia combined."

And further, "The figure is almost as large as the population of Canada."