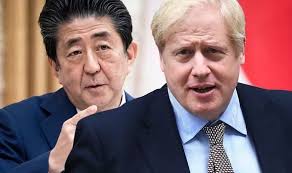 But on Friday morning, American traders awoke to some surprisingly positive trade news out of Great Britain. A trade deal with Japan had been agreed to in principle, which would - if finally ratified by both countries - allow 99% of the UK's exports to Japan to cross the border tariff-free.

What's more, the deal even gave Johnson the opportunity to gloat, as Reuters reported the digital and data provisions in the agreement went "far beyond" those in the EU's trade deal with Japan.

Though, unsurprisingly, the PM's critics insist that these deals won't replace the trade lost from the EU. Though that, of course, remains to be seen.

Critics say such agreements are unlikely to replace exports lost to the EU if a deal cannot be struck with Brussels.

The EU has ordered Britain to scrap a plan to break their divorce treaty, but Johnson's government has refused, potentially sinking four years of Brexit talks.

Japan wanted to reach broad consensus with Britain on trade this week before a change in government in Tokyo which could have caused the negotiations to drift.