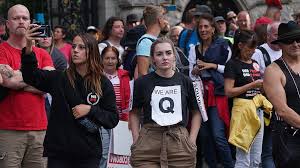 Flags and banners brandishing one of the conspiracy's mottos — "WWG1WGA," an acronym for "where we go one, we go all" — dotted the crowd at a rally against lockdowns in Germany last month.

And when Trump visited Japan in 2019, he was greeted by cardboard cutouts of the letter Q.

These aren't just isolated instances either. Researchers have found large QAnon communities in more than 70 countries.

The original conspiracy theory was tightly focused on an alleged cabal of deep state figures and Hollywood elites running child trafficking rings that Trump was working with the military to expose. But it has since evolved into a meta-conspiracy theory that pushes its anti-institution and anti-Semitic strains more explicitly.

Experts who spoke with The Hill about the theory's spread said it has become worse because of the coronavirus, which itself is the subject of many conspiracy theories. This helped create a perfect storm fostering distrust in established government and public health institutions.