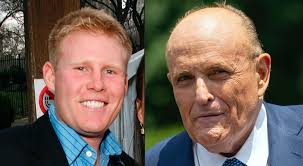 The son of former New York City Mayor Rudy Giuliani may be following in his father's footsteps, telling the New York Post that he may run for mayor in 2021.

The elder Giuliani has been highly critical of current Mayor Bill de Blasio, and Andrew is no different. In discussing his potential political plans, he warned that if the next mayor is like the present one, the city could descend to lows not seen in decades.

"I am certainly thinking about it. It's something that a bunch of people that I trust have approached me with," Andrew Giuliani, 34, told The Post. "It's been terrible to see over the last few years how the city has spiraled. I am afraid if the right candidate doesn't win in 2021, four more years of de Blasio's policies will remind us of the '80s."

He went on to say that de Blasio "does not value the New York Police Department and he does not value what they have done for the city," citing recent budget cuts and the elimination of the plainclothes anti-crime unit.