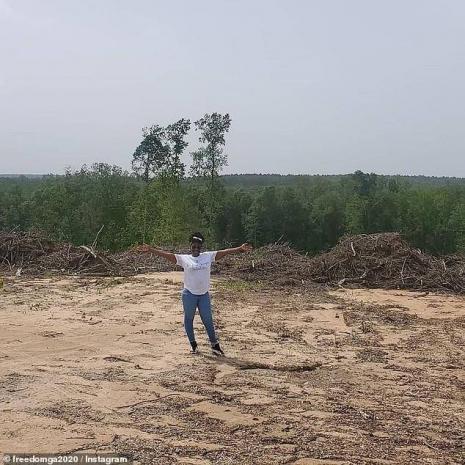 A group of 19 African American families have bought a 97-acre tract of land in rural Georgia which they plan to use to create a city that will serve as a 'safe space' for black families.

The planned black cooperative town, which will be known as Freedom, is slated to be built on land purchases in August that sits just east of Macon, Georgia in Wilkinson County.

It is the brainchild of real estate agent Ashley Scott and her friend, Renee Walters, an investor and entrepreneur. The two women are holding fundraisers to help pay for the initiative and describe themselves as a 'a black-owned, woman-owned, family-owned, veteran-managed, limited liability company'.

'We figured we could try to fix a broken system or we could start fresh. This is how we build our new Black Wall Streets. We can do this. We can have Wakanda. We just have to build it for ourselves,' Scott said. Wakanda is the fictional African city of the Black Panther comic book series.

White people who are 'pro-black people' can also apply to live there. Scott told CNN: 'I'm hoping that it will be a thriving safe haven for people of color, for black families in particular.