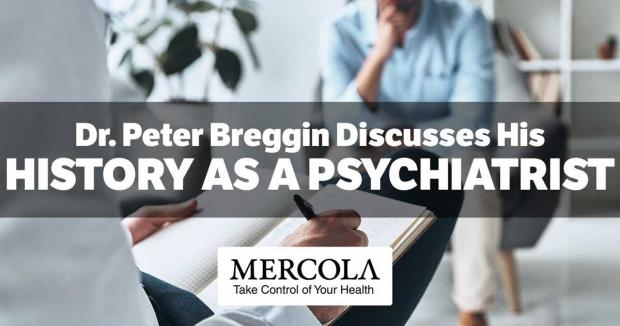 Dr. Peter Breggin, a psychiatrist, has written more than a dozen bestselling books on psychiatry and the drug industry. He's frequently referred to as "the conscience of psychiatry" because he's been able to successfully reform the psychiatric profession, abolishing one of the most harmful practices, namely lobotomies and other experimental psychosurgeries.

He was the first to take a public stand against lobotomies as a young man, and was able to change the field as a result. He's featured in Aaron and Melissa Dykes' excellent documentary, "The Minds of Men."1

Now 83 years old, Breggin has seen a lot, and in this interview, he shares his own evolution and experiences as a psychiatrist. His interest in psychiatry began at the age of 18, when he became a volunteer at a local state mental hospital.

"It was a nightmare," he says. "It was like my uncle Dutch's descriptions of liberating a Nazi concentration camp. The place stank. People were sitting in these bare, barren concrete corridors.

They had a TV set that wasn't working … and bolted down tables and chairs so the people couldn't throw them at each other. No attention being given to them at all. Often just sitting there; some hallucinating, and somebody told me that the girl in the corner coiled up in a ball on the floor by a radiator had been a Radcliffe student …

The doctors were callous, the aids were callous, there was just no love in the place at all. I could tell, even though I didn't really have much experience growing up with love, I could feel that what was missing was love, care, nurturing. It was so clear."

Breggin eventually became the leader of that volunteer program. He and 200 other students painted the walls and took patients for walks. He asked the superintendent to assign one patient per volunteer aid, to build real relationships. The superintendent balked at the idea, but eventually gave in. Breggin tells this story in his book, "Toxic Psychiatry."2

"We ended up getting almost every patient out of that hospital," he says. "We got them placed in different places that were much better. We got some back with their families. It was so clear to me that this was the way to go …

I watched electroshock and insulin coma shock where people would come in and they'd give them overdoses of insulin to send them into coma. They'd be frothing at the mouth, unconscious, having seizures and getting ready to die, literally. Then they would give them orange juice or sugar water and they would become alert again.

It was so clear to me what was going on. People would come in full of energy — angry, depressed, anxious and often resistant … They'd get this injection of insulin to knock them out, killing them, basically, but when they came awake they were like puppies. They were grateful, they said 'Thank you, I feel like you saved me.' They'd be docile … There's no fooling about what this was. I knew exactly what it was.

I knew what shock treatment was … I've been fighting this, but we're still doing it … It's when they put electrodes on the forehead of the brain … You get a shock of a voltage … 10 times what you need to give convulsions … and it makes docility. It makes people out of touch with themselves. It makes people unable to complain … [Elevated mood] is the artificial euphoria [caused by] brain damage. This is very brain damaging."