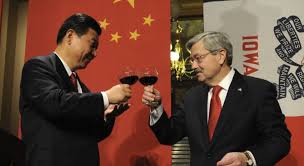 He's expected to leave Beijing in October, which means he'll be gone before the November election.

That will leave the US without a Congressionally-confirmed ambassador in place in Beijing during what's expected to be one of the most difficult elections in US history. Allegations of meddling from China, Russia and other states have only exacerbated a national mood of paranoia.

Trump proclaimed that Barnstad had been offered the ambassador job because of his deep links to China, and his personal friendship with President Xi, whom he has known since 1985 through the US-China government exchanges.

Branstad was chosen early on, and was seen as a major 'get' for Trump during the early days, given Branstad's status as the former governor of Iowa, an agricultural state with deep trade links to China.

I thank Ambassador Terry Branstad for his more than three years of service to the American people as U.S. Ambassador to the People's Republic of China.

President @realDonaldTrump chose Ambassador Branstad because his decades long experience dealing with China made him the best person to represent the Administration and to defend American interests and ideals in this important relationship.

Survival 101: Focus on What Will IMMEDIATELY Kill You, NOT Irrelevant Details

Border Patrol Agent Killed Texas Shooter After Rushing In With No Backup;

Hunter Biden Probe Ramps Up Ahead Of Midterms

Rabobank: Michael Burry Warns That The Economy Looks Like A House Of Cards... And He Is Right