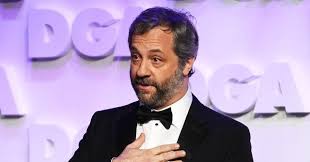 In a preview for an upcoming episode of "Mavericks with Ari Melber," Apatow said that what concerns him is "a corporate type of censorship that people don't really notice, which is a lot of these giant corporate entities have business with countries around the world, Saudi Arabia or China, and they're just not going to criticize them, and they're not going to let their shows criticize them, or they're not going to air documentaries that go deep into truthful areas because they just make so much money."

Compared to discussions of "can we say this joke or not say that joke?", Apatow said, what's "much scarier" is how "they have just completely shut down critical content about human rights abuses in China."

"No one would buy the pitch," he said. "Instead of us doing business with China and that leading to China becoming more free, what has happened is a place like China has bought our silence with their money."