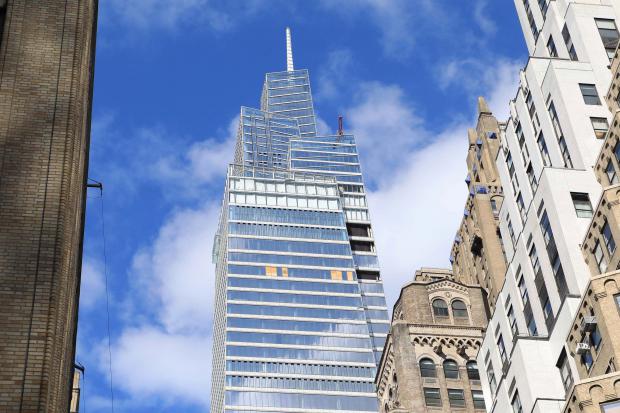 What would normally have been a lavish unveiling for the massive building - owned by SL Green Realty Corp. - instead fell on the deaf ears and the muted pulse of a city that is still all but shut down as a result of the coronavirus pandemic.

The building's first tenants are set to arrive by the end of the year, according to Bloomberg. SL Green had predicted on a conference call earlier this summer it would have 72% of the building leased by year's end. This falls short of the company's 82% target.

We'll take the 'under' on those numbers. The launch of the new piece of property not only comes at a time when the city is shutdown, but also at a time when tenants are fleeing commercial real estate in favor of allowing their employees to work from home.

SL Green currently has about 900 tenants across the city and they "all want to be back in the buildings," according to the company's CEO Marc Holliday. But honestly, what else would he have said?

To the company's credit, it signed two new leases during the pandemic, locking up TD Bank and Carlyle Group as several of the first tenants to move into the building. SL Green has also committed to making upgrades to the area as part of the building, including a pedestrian plaza on Vanderbilt Avenue and enhanced access to and from Grand Central Station.

SL Green's stock had been down 51% this year, mostly as a result of impacts from the pandemic, but rallied slightly during Monday's session as the broader market gained.

And despite most areas of the city still looking extremely thin, companies like J.P. Morgan have started asking their employees to return to their offices over the next few weeks. Landlords of all types of real estate have begun pushing New York City to begin returning to normalcy.