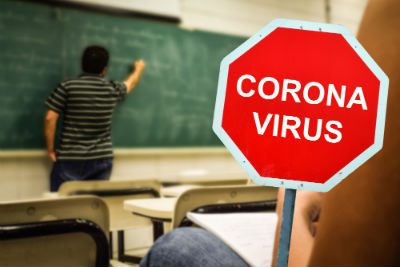 "There was of course no way of knowing whether you were being watched at any given moment. How often, or on what system, the Thought Police plugged in on any individual wire was guesswork. It was even conceivable that they watched everybody all the time. But at any rate they could plug in your wire whenever they wanted to. You had to live—did live, from habit that became instinct—in the assumption that every sound you made was overheard, and, except in darkness, every movement scrutinized."—George Orwell, 1984

Once upon a time in America, parents breathed a sigh of relief when their kids went back to school after a summer's hiatus, content in the knowledge that for a good portion of the day, their kids would be gainfully occupied, out of harm's way, and out of trouble.

Back then, if you talked back to a teacher, or played a prank on a classmate, or just failed to do your homework, you might find yourself in detention or doing an extra writing assignment after school or suffering through a parent-teacher conference about your shortcomings.

Of course, that was before school shootings became a part of our national lexicon.

As a result, over the course of the past 30 years, the need to keep the schools "safe" from drugs and weapons has become a thinly disguised, profit-driven campaign to transform them into quasi-prisons, complete with surveillance cameras, metal detectors, police patrols, zero tolerance policies, lock downs, drug sniffing dogs, school resource officers, strip searches, and active shooter drills.

Suddenly, under school zero tolerance policies, students were being punished with suspension, expulsion, and even arrest for childish behavior and minor transgressions such as playing cops and robbers on the playground, bringing LEGOs to school, or having a food fight.

As a result, students are being subjected to police tactics such as handcuffs, leg shackles, tasers and excessive force for "acting up," in addition to being ticketed, fined and sent to court for behavior perceived as defiant, disruptive or disorderly such as spraying perfume and writing on a desk.

This is what constitutes a police state education these days: lessons in compliance meted out with aggressive, totalitarian tactics.

The COVID-19 pandemic has added yet another troubling layer to the ways in which students (and their families) can run afoul of a police state education now that school (virtual or in-person) is back in session.

Significant numbers of schools within the nation's 13,000 school districts have opted to hold their classes online, in-person or a hybrid of the two, fearing further outbreaks of the virus. Yet this unprecedented foray into the virtual world carries its own unique risks.

Apart from the technological logistics of ensuring that millions of students across the country have adequate computer and internet access, consider the Fourth Amendment ramifications of having students attend school online via video classes from the privacy of their homes.

Suddenly, you've got government officials (in this case, teachers or anyone at the school on the other end of that virtual connection) being allowed carte blanche visual access to the inside of one's private home without a warrant.

Anything those school officials see—anything they hear—anything they photograph or record—during that virtual visit becomes fair game for scrutiny and investigation not just by school officials but by every interconnected government agency to which that information can be relayed: the police, social services, animal control, the Department of Homeland Security, you name it.

After all, this is the age of overcriminalization, when the federal criminal code is so vast that the average American unknowingly commits about three federal felonies per day, a U.S. Attorney can find a way to charge just about anyone with violating federal law.

It's a train wreck just waiting to happen.