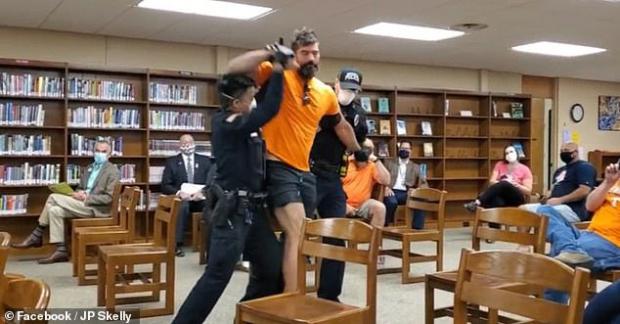 The wife of a 'powerful' sewage technician who was wrestled out of a South Dakota school board meeting for refusing to wear a mask is speaking out in his defense.

On Monday night a man identified by police as Reed Bender refused to wear a mask at a Mitchell School Board meeting in defiance of a school district mask mandate enacted in July.

Authorities were called to remove the man but he refused to budge saying 'you're going to have to drag me out'. Officers threatened him with a stun gun and forcibly removed him.

Bender's wife Teri Bender shared on Facebook that she stands by her husband and supports 'maskers and non-maskers'.

'This man has saved me in so many ways and has stood by me through things most people can't make it through… we got this,' she said Wednesday sharing a photo of them together on Facebook.

'People's beliefs of what's right and what's wrong are viewed differently. And that's ok. I love YOU for who YOU are and I'm not going to ever judge you on what you believe in,' she added.