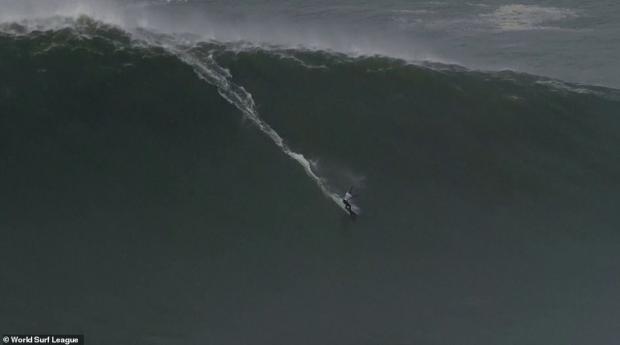 Brazilian daredevil Maya Gabeira has improved her own world record for the biggest wave surfed by a woman.

She rode a 73.5 foot giant at Portugal's Nazare and overshadowing the top male surfers in the process.

Gabeira, who broke her leg and almost drowned at the same spot in 2013, was towed by jetski into her winning wave during a World Surf League (WSL) Big Wave competition in February.

It not only topped her 68 foot record from 2018, also at Nazare, but was the biggest wave ridden by any surfer over the last year.

'This world record really strikes me as quite amazing because the size of the wave was taller than the men's size this year,' Gabeira said.

'It means a woman actually rode the biggest wave of the year overall and that to me is crazy.

'I had dreamed of it years ago but not as something realistic because there was no representation for me to believe that it was possible.'

In an interview with World Surf League following the event, she said: 'It's a proof to myself that I still love the sport, even after so many hard times and hard years, and serious injuries and traumas.'