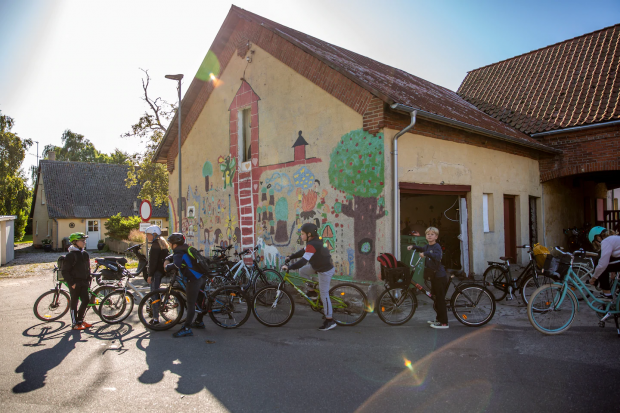 His gaze turned to another group, who were supposed to be working on math problems. Two students, perched on a log, scrambled to produce their textbooks, just in time to look busy.

Lukas began the year teaching in a classroom like any other, in Samso Frie Skole, a school on the Danish island of Samso. But when the novel coronavirus pandemic struck, the school, like many across the country, embraced a new way to hold certain classes: almost entirely outdoors.

Instead of sitting at desks, Lukas's students wander through a rambling woodland, lush with trees and crisscrossed by dirt tracks.

As countries grapple with how and when to restore students to classrooms, a growing number of schools have embraced outdoor learning - especially in the highly regarded Nordic education systems, where the model had already begun to gain momentum.

When many Danish schools reopened in April, Prime Minister Mette Frederiksen urged teachers to allow for as much time outdoors as possible, as a precaution against the spread of the virus. In Norway, education and health officials also recommended that classes meet outside.

Out of nearly 200 Norwegian schools willing to respond to a recent survey by researchers Ulrich Dettweiler and Gabriele Lauterbach, the results of which have not yet been published, more than half said they had begun to provide more outdoor classes. Researchers in Denmark said they had observed a similar trend.

1 Comments in Response to In Denmark, the forest is the new classroom

What's the biggest thing taught in the classroom? It isn't things like reading, writing or arithmetic. And I'll sim[ply point out one of them here. You can find others when you think about it. But... all kids of elementary age would love to be out in the real woods of nature, running and jumping and living life to the fullest. But they are taught to SIT, in the classroom. Of course, there are other government/big-business kinds of indoctrination.

When You Don't Know Who To Vote For

Glenn Greenwald on resigning from his own publication due to censorship