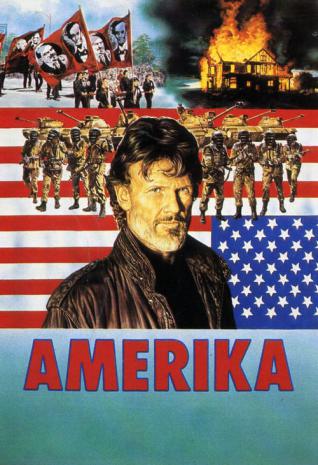 It starred Kris Kristofferson, Mariel Hemingway, Sam Neill, Robert Urich, and a 17-year-old Lara Flynn Boyle in her first major role. "Amerika" was about life in the United States after a bloodless takeover by the Soviet Union. Not wanting to depict the actual coup, ABC Entertainment president Brandon Stoddard instead chose to set the action of the miniseries ten years after the event, focusing on the demoralized American people a decade after the Soviet conquest. The intent, he later explained, was to explore the American spirit under such conditions, not to portray the conflict of the Soviet takeover ... Described in promotional materials as "the most ambitious American miniseries ever created," Amerika aired for 14? hours (including commercials) over seven nights, and reportedly cost US$40 million to produce. The program was filmed in Toronto, London, and Hamilton, Ontario, as well as various locations in Nebraska -- most notably the small town of Tecumseh and Milford, the setting for most of the action of the series. Donald Wrye was the executive producer, director, and sole writer of Amerika, while composer Basil Poledouris was hired to score the miniseries, ultimately recording (with the Hollywood Symphony Orchestra) eight hours of music -- the equivalent of four feature films. (from Wikipedia)