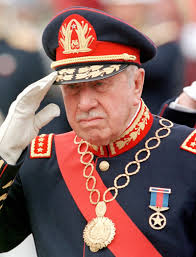 Recall that Allende came into power as a self-avowed socialist — that is, a person who believes that it is the rightful role of government to take care of the citizenry. Thus, Allende ardently embraced such socialist programs as Social Security, government-provided healthcare, public schooling, welfare, income taxation, and others.

Headed by Republican President Richard Nixon, the U.S. regime in 1970 was ardently rightwing. The national-security establishment — i.e., the Pentagon, the military-industrial complex, the CIA, and the NSA — were also deeply conservative.

As I pointed out in my article "The Siren Song of Social Security and Socialism," U.S. officials viewed Allende's election as a threat to U.S. "national security" because of the increasing possibility that socialism would become more attractive to the American people. Thus, Nixon and his national-security establishment decided to oust the leftwing Allende from power and replace him with a right-wing military general.

That finally happened in 1973. On 9/11 of that year, the national-security branch of the Chilean government went on the attack and attempted to assassinate Allende with missiles fired from military aircraft into Allende's position in the National Palace. Once Chilean infantry surrounded the palace, Allende had no possibility of winning the battle.