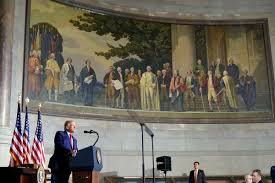 President Trump pressed his case Thursday that U.S. schools are indoctrinating children with a left-wing agenda hostile to the nation's Founding Fathers, describing efforts to educate students about racism and slavery as an insult to the country's lofty founding principles.

Trump, speaking before original copies of the Constitution and Declaration of Independence at the National Archives, characterized demonstrations against racial injustice as "left-wing rioting and mayhem" that "are the direct result of decades of left-wing indoctrination in our schools. It's gone on far too long."

The federal government has no power over the curriculum taught in local schools. Nonetheless, Trump said he would create a national commission to promote a "pro-American curriculum that celebrates the truth about our nation's great history," which he said would encourage educators to teach students about the "miracle of American history."

Trump is calling the panel the "1776 Commission," in what appeared to be a barb at the New York Times's 1619 Project. The project, whose creator won a Pulitzer Prize for its lead essay, is a collection of articles and essays that argue that the nation's true founding year is 1619, the year enslaved Africans were brought to the shores of what would become the United States. Trump said Thursday the 1619 Project wrongly teaches that the United States was founded on principles of "oppression, not freedom."