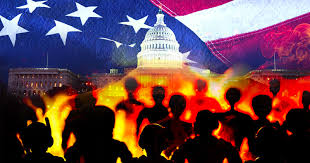 (Natural News) What follows is a likely timeline of events to take place between now (Sep. 20, 2020) and Jan 20, 2021. Due to the extreme volatility of current events, almost no one dare make predictions these days, but this timeline is based on interviews with top law enforcement who have ties to federal agencies, with additional sources from the militia community as well as individuals close to the Trump administration.

This timeline, although subject to change, is our current best guess at how the moves on the chess board are likely to play out. It covers the SCOTUS nomination, Election Day, the Insurrection Act, left-wing terrorism, financial markets, election outcomes and more. There's also a commendable overview of the coming chaos at this All News Pipeline story, which is worth checking out after you review the timeline below.

Here's what I see as likely to play out, given the current best information:

-Left-wing insurrectionists will continue to ramp up their riots, resorting to increasingly violent and escalated attacks on law enforcement, federal buildings and conservative groups such as Proud Boys.

-These attacks will almost exclusively take place in blue cities, in blue counties, in blue states. That's because Democrats allow and even encourage these riots, while Republicans tend to shut them down with police action. Recent attempts by left-wing rioters to stage large events in red states (such as Texas) have been quickly shut down, and both Antifa and BLM terrorist organizations only have legal protection for their acts in areas where left-wing DAs will refuse to charge them with crimes.

-Notably, a new surge of riots and violence will now take place due to the passing of Ruth Bader Ginsburg, the infanticide advocate who was a hero of the bloodthirsty Left because she protected their "right" to murder their own babies without legal consequences. As child murder is a core value of the demon-worshiping Left, they are infuriated over the thought that a foe of unlimited abortion might be appointed to the court.

-We anticipate pro-abortion rioters and left-wing anarchists will specifically target the homes of GOP Senators, rioting outside their homes and threatening violence against them if they do not agree to delay any vote on a new Supreme Court justice until after January 20th. These riots have already begun against McConnell, but will expand to many other senators.

-Importantly, President Trump will not take aggressive law enforcement action against terrorist uprisings before the election. Rules of Engagement with rioters will continue to be relatively passive, allowing rioters to escalate their tactics without much of a response from federal law enforcement. All this will change after the election (see below), but until then, America is going to have to endure 40+ days of chaos, arson, violence and illegal rebellion activity that will target Trump supporters, law enforcement, Christians and conservatives.

-The stock market will continue to trend upward during this time due to relentless money printing by the federal reserve. They will pull out all the stops to keep the markets going, even if it means directly purchasing equities. There will be a huge price to pay for all this money printing later, of course…

-There is a strong possibility of a military conflict with China in the South China Sea area (near Taiwan) before the election. Pentagon forces are itching for war, and they want to stage a conflict there to open the coffers so that more money flows to weapons contractors who give kickbacks to top Pentagon officials.

-On Election Day, Big Tech will activate widespread censorship of nearly all conservative channels, blacklisting them from posting so that only pro-Biden conversations can take place online. Any who post in favor of Trump will be instantly banned.

-The insurrectionist corporate media will gaslight the nation, declaring Trump isn't winning even when he is. Any results that show Trump winning in a landslide will be dismissed as "early" disinformation, because of course the media has to give the Democrats enough time to counterfeit the fake ballots they need in the districts they need to try to steal the election.

-As the elections get under way, the left-wing media will fake exit polls to try to establish that Biden is winning. This way, when Democrats counterfeit ballots, the stolen election results will match all the exit polls, and the media will claim it all checks out.

-By the end of the day, Trump will be winning an electoral victory, but many swing states such as Michigan and Pennsylvania will deliberately delay the reporting of their results, claiming mail-in ballots will take "weeks" to count, so they will refuse to officially report any victory for Trump.

-Throughout Election Day, the left-wing media will also robotically claim "voter suppression," setting up the narrative that if Trump wins, he must have won by suppressing the vote of black people, because he's a "racist," of course.

-Note: I will be covering Election Day events LIVE, in real time at my social media platform Brighteon.social, where you can follow me at: https://brighteon.social/@HealthRanger

-Immediately after the election, Democrats will likely activate their full-blown chaos agenda to throw the country into mass chaos, making any accurate counting of remaining votes almost impossible. This will likely begin with so-called "Zero Day" attacks that target key US infrastructure, including the power grid, telecommunications, transportation and water supplies.

-These attacks will plunge many areas of America into extreme chaos and lead to exploding crisis scenarios which will quickly escalate into panic among the populations of certain cities where the attacks are focused.

-In concert with the Zero Day attacks, left-wing insurrectionists will be given the "go" signal to flood into the streets, violently attacking Trump supporters with the full forces of the weapons that have been smuggled into the hands of Black Lives Matter terrorists via communist China, which is providing heavy weapons to US insurrectionists (full-auto battle rifles, RPGs, mortars and more).

-Within days, many of America's streets will be full-blown active war zones. This will quickly force Trump to invoke the Insurrection Act, which he will do, activating military assets which he has pre-positioned in 50 US cities, under the cover of "Operation Warp Speed" (the vaccine program).

-From here, curfews will be enacted in many cities, and military personnel will quickly regain control of the streets. This will drive left-wing forces into guerrilla warfare mode, which will continue through January. In this mode, left-wing terrorists will resort to classic guerilla warfare tactics such as sabotage, politically targeted assassinations and bombings of key infrastructure. We are going to witness the radical Left descend into a full-blown militant insurrectionist force like the "Shining Path" in Peru, with kidnappings of the children of prominent conservatives, assassinations, bombings and more. It won't take long for this to escalate.