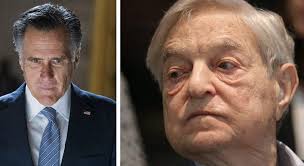 Disturbingly, back in 2012, George Soros said he saw little difference between Mitt Romney and Barack Obama, and it has now been revealed that Romney is on George Soros' payroll.

The Utahn senator stunned everyone when he became the only Republican to vote to convict President Donald Trump in the recent Democrat-led impeachment sham.

According to OpenSecrets.org, Romney has accepted at least $17,500 from Soros Fund Management, a left-wing influence operation funded by notorious globalist billionaire George Soros.