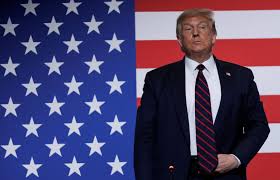 At first glance, Trump may actually have a claim to the dynamite-maker's prize. He has brokered normalization between Israel and two of its erstwhile Arab enemies, with more expected to follow. He may have also cleared the last foyer of conflict in former Yugoslavia by mediating a settlement between Serbia and Kosovo.

In both cases he has managed to jump historic, emotional and ideological hurdles that many, including this writer, believed could not be crossed in the foreseeable future. How he did it and what underhand measures he employed to clinch the deals is a matter for speculation. But what matters, as far as the Nobel judges are concerned, is that he did it; he brought peace where there was conflict.

Trump the peacemaker? The liberal elites on both sides of the Atlantic react to that phrase with a hearty "Ha! Ha! Ha!" or an angry cry of "scandal".

But, wait a minute, a closer look may tell a different story.

First, with the exception of Dwight Eisenhower, Trump is the only US president since World War II not to have led his nation into a war, big or small.

President Harry Truman took America into the Korean War. John F. Kennedy got the US involved in the Vietnam War. His successor Lyndon Johnson extended the war into Laos. Richard Nixon and Gerald Ford prolonged the war and extended it into Cambodia. Ronald Reagan had his mini-war in Grenada plus proxy wars in El Salvador and Nicaragua while also helping British allies in the Falklands conflict.

George H. W. Bush led the invasion of Iraq plus a mini but costly incursion in Somalia. Bill Clinton dragged the US into the Yugoslav conflict. George W. Bush drew a double by invading first Afghanistan and then Iraq. Leading from behind, Barack Obama got the US involved in the Libyan war while starting the largest drone war in history in Afghanistan, Pakistan and Yemen. He also incited the Arabs to rebellion against their governments but then refused to raise a finger to help them, thus lighting the fire of civil wars, notably in Syria. His support for the mullahs of Tehran also encouraged them to speed up their empire-building efforts, plunging much of the Middle East into violence and war.