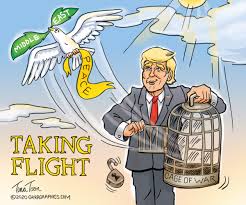 Assuredly, this is a major diplomatic breakthrough, and Nancy's Pelosi's sour-grapes dismissal of the deal as a "distraction" testifies to that truth.

Indeed, the Gulf Arabs could be signing up to recognize Israel because they see the Jewish state as an indispensable ally in the Arab Sunni clash with the larger and more powerful Shiite Iran.

In 1979, the Camp David Accords were signed in a land-for-peace deal whereby Israel returned the Sinai, captured in the 1967 Six-Day War, to Egypt. Egypt's Anwar Sadat and Israel's Menachem Begin both won the Nobel Prize for Peace. Yet, while peace was established between Cairo and Jerusalem, that did not inaugurate an era of peace.

Jordan's King Hussein recognized Israel in 1994. Yet, since then, Israel has fought wars with Hamas in Gaza, Hezbollah in Lebanon and the Palestinians of the West Bank in successive intifadas.

The Palestinian issue also seems no closer to resolution.

What the Gulf Arabs are saying with these recognitions is that the seemingly irreconcilable Palestinian-Israeli conflict can no longer be permitted to interfere with the Arabs' pursuit of allies in the conflict that more immediately concerns them — that of Iran against the Sunni Arab nations of the Persian Gulf.

The Palestinians are the losers here, having lost their veto power over Arab nations establishing ties to Israel. As for the Israeli-Palestinian conflict, it seems even further from resolution.