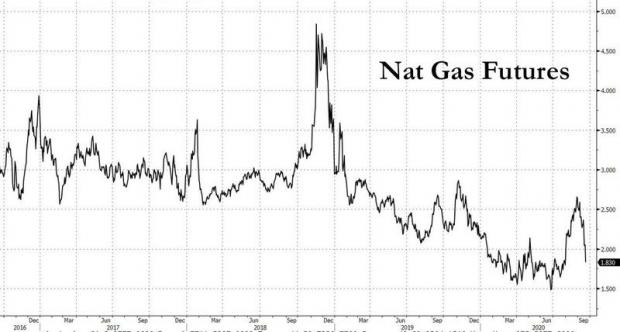 "Tropical Storm Beta is definitely a big driver," says Christin Redmond, an analyst at Schneider Electric. "Although overall it's a short-term effect, each week that we have this lower demand, we get higher storage injections. And with three storms hitting in less than a month, we're getting those effects building on each other."

"Although it's not hurricane strength anymore, it could cause significant flooding and may cause some LNG export facilities to temporarily shut in" Redmond added noting that these storms have resulted in 12% y/y losses in power demand for gas since start of Sept. At the same time, data provider Refinitiv added that the amount of gas flowing to U.S. LNG export plants was on track to slide to a two-week low of 5.2 bcfd on Monday from a four-month high of 7.9 bcfd last week.

As Bloomberg further observes, citing BNEF data, gas demand from power generators is estimated at just under 30 bcf for Monday, lowest for any Sept. 21 since 2015. Scheduled gas flows to LNG export terminals -33% from Sept. 18 to ~5.6 bcf on Monday.