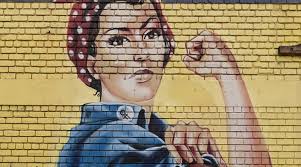 The answer is important. A surreal dynamic has politicized every crevice of society and decent people now need to defend themselves against groundless accusations of racism, misogyny, and other "hate" crimes in order to keep their jobs, their reputations, and their futures.

An understanding of where the dynamic originates gives them more of a fighting chance. The answer begins with defining FLM and describing their interconnection.

(Of necessity, the ensuing analysis is highly simplified.)

Gender feminism became prominent in the 1970s and '80s. It is called "gender" feminism because this form of feminism explains the world by dividing men and women into antagonistic classes. Also known as third wave feminism, its ideological successor is sometimes called fourth wave feminism; it focuses on equity for women and minorities, the use of social media as a political weapon, and on intersectionality.

The New Left was a broad coalition of liberals, radicals, and unorthodox Marxists in the 1960s. The word "New" distanced it from pure Marxism and the Old Left which focused on labor. By contrast, the New Left championed cultural causes such as feminism and gay rights. This is a Maoist approach to revolution—a cultural revolution to change "the system" by upending the traditions and institutions upon which everything else rests. That's why the New Left was sometimes called the counterculture. Social justice emerged in its wake.

Marxism is the theory and practice of communism; it advocates class warfare as a path to a society in which there is no private property and goods are available based on need. The different schools of communism are united by some core beliefs. Two of them: capitalism is exploitation, and people are defined by their class affiliation.