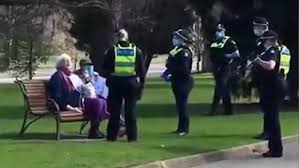 It's one of many recent viral videos to come out of Australia's southeast state of Victoria, home to Melbourne, showing absurd "crackdowns" by police for alleged coronavirus policy violators. "As a pregnant woman I can't sit in the park?" the incredulous woman whose story was covered widely in local media asked the couple of officers who harassed her.

Apparently not... because COVID. "You can only be out of your house for one of four reasons," the officer responded. "One of those would be exercise. Sitting in a park is not one of the four reasons."

The woman reasoned, "So, I'm pregnant and obviously my exercise is limited because I have to walk I'm now puffed out because I'm 38 weeks pregnant. So, even I can't sit in a park, is that right?"

"You can only be out for one of the four reasons," the officer asserted, explaining that her designated one-hour of exercise outdoors still includes certain restrictions (as if free citizens are under a prison regimen!).

But the above scene which unfolded earlier this month is nothing compared to another recent moment caught on video of police surrounding two old ladies resting on a park bench in Melbourne.

Truly disgusting ???? - I thought we were supposed to be looking after our elderly?

How many cops for two little old ladies? https://t.co/yb9R6nEIsd pic.twitter.com/wHqzT5HdG4