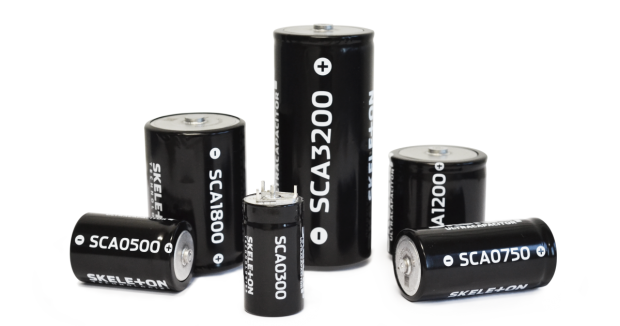 So what is it? Well, it appears it's a hybrid pack combining regular lithium-ion cells and Skeleton's own ultracapacitor cells, which feature a curved graphene construction, working in tandem, each part playing to its strengths.

To put it simply, lithium batteries offer high energy density, meaning they store a lot of energy, but they tend to have a fairly low power density, meaning they charge and discharge relatively slowly. That's why EVs take so long to charge up, which is one key bottleneck the auto industry would love to eliminate.

Supercapacitors, or ultracapacitors, store charge statically instead of in a chemical form, so they offer enormous power density, charging and discharging at vastly higher rates, and last for hundreds of thousands of cycles without degrading. The flip side here is that their energy density is terrible compared to lithium; to hold the same amount of energy you need a battery pack many times bigger than a comparable lithium pack.

The solution, as has been proposed before by companies like Nawa – and which many believe underpins Tesla's acquisition of Maxwell – is to put together a hybrid energy system with a mix of lithium and supercapacitors. The lithium gives you long-term, high-density storage, while the capacitors give you high power outputs, the ability to work across a very wide range of temperatures, and super-fast charge capability, not only at the charging station but also when it comes to harvesting energy through regenerative braking.

It is indeed a neat solution if you get the balance right. But to say you're offering 15-second charge times comes across to us as possibly a bit disingenuous. Yes, ultracapacitors can charge that quickly, no problems. But the lithium part of the pack certainly can't. So what's really going on here is probably more along these lines: if you run your battery out, you'll be able to do a super-quick capacitor charge that'll get you enough energy for some short-range driving.