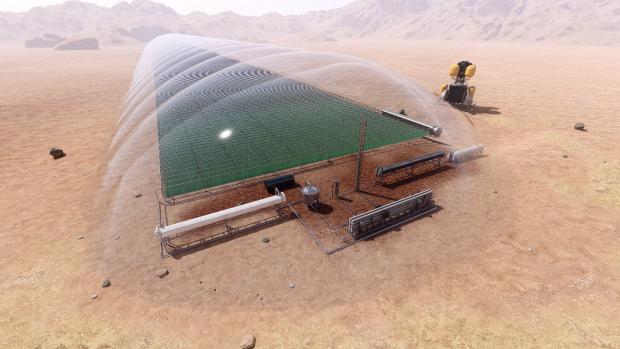 Georgia Tech aims to reduce the Entry Descent Landing (EDL) mass of a crewed mission to Mars by approximately 7 tons. This technology will enable long-term human presence on Mars and beyond because costly propellant deliveries from Earth would be unnecessary. They will genetically engineer algae to efficiently convert the abundant CO2 in the Martian atmosphere into liquid hydrocarbons suitable for rocket propulsion and other energy needs on Mars. The proposed system grows algae biofilms that consume atmospheric CO2 and sunlight with minimal water resources.

The algae then provide a food source to the genetically optimized organisms/microbes, which are engineered to produce a monomer with ideal combustion behavior and liquid properties. These monomers would be used in a pump-fed LOX/monomer propellant combination to power a human-crewed Mars Ascent Vehicle (MAV). They will focus on the production of C3-C4 diols, which have low melting points (less than -36ºC) for use as a liquid on Mars, and optimal energy content (over 14MJ/L), to provide the minimum thrust needed for ascent from Mars.

The chemical and physical properties, and energy density of these monomers suggest that they are capable of sufficient energy conversion through combustion for a crewed launch from Mars, making them excellent candidates for an ISRU rocket propellant. They are also liquid over a wide range of typical Mars temperatures, making them non-cyrogenic and storage stable. The oxygen atoms in the designed monomer will also enable a cleaner burn than conventional hydrocarbon propellants, supporting the reuse of rocket engines for multimission and interplanetary trips. Our approach will test the thermo-physical-chemical properties and combustion behavior of a suite of monomer rocket propellant candidates, while simultaneously developing the biological system for synthesizing them on Mars. By working together and in parallel, we will efficiently integrate testing feedback to quickly arrive at a co-optimized ISRU LOX/monomer rocket propellant. In total, these advantages will reduce infrastructure and resources needed to support human missions to Mars, and future, more ambitious efforts to expand human presence throughout the solar system.