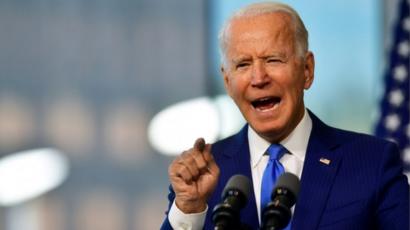 Joe Biden says that voters don't have the right to know who his Supreme Court nomination will be until after he wins the presidency.

The exchange happened during a campaign stop earlier today when Biden accused Donald Trump of trying to change the subject by focusing on who the former Vice President would pick to replace the late Ruth Bader Ginsburg.

"Should voters know who you're going to appoint?" Biden was asked.

"No they don't but they will if I'm elected, they'll know in plenty of time," he responded.

The remark is likely to prompt a wave of criticism given that the identity of any potential nominee will become a defining factor of the last 6 weeks of the election cycle.

Meanwhile, President Trump announced that he would be announcing the name of his candidate on Saturday.

"I will be announcing my Supreme Court Nominee on Saturday, at the White House! Exact time TBA," he tweeted.

Asked if voters have a right to know before the election who he would nominate to SCOTUS, Biden says, "No, they don't." pic.twitter.com/VkXUnjWzBM