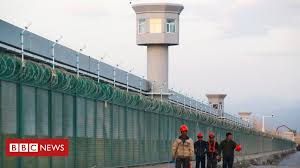 China has expanded its network of detention centres in Xinjiang, new study says

China's network of detention centres in the northwest Xinjiang region is much bigger than previously thought and has been expanded in recent years, according to research presented by an Australian think tank Thursday.

The Australian Strategic Policy Institute said it had identified more than 380 'suspected detention facilities' in the region - where China is believed to have detained more than one million Uighurs and other mostly Muslim Turkic-speaking residents.

The number of facilities is around 40 per cent greater than previous estimates and, according to Australian researchers, has been growing despite China's claims that many Uighurs have been released.