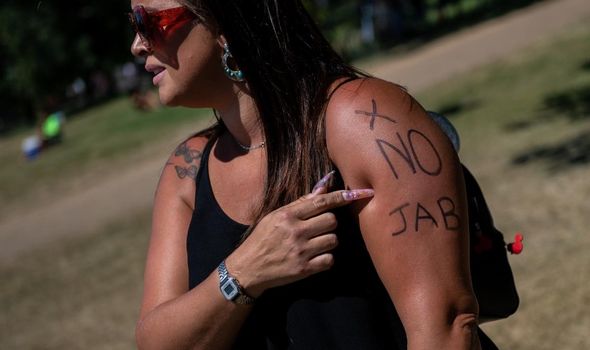 Younger voters were twice as likely to oppose the vaccine in the poll of 2,237 people aged between 16 and 75. To gauge readers' views on the topical issue, Express.co.uk conducted an exclusive poll asking: "Should Britons be forced to have the coronavirus jab once it is developed?

Sixty-five percent (2,906) of respondents said no, with many saying they would have to be dragged kicking and screaming to have the vaccine administered.

Thirty-four percent (1,617) said a compulsory vaccine programme should be rolled out across the UK, one of Europe's hardest-hit countries since the beginning of the pandemic.

One reader said they would not feel safe having a coronavirus vaccine injected into their body because they simply cannot trust pharma giants.
They said: No vaccine, whose manufacturer demands an indemnification, can be trusted."

A second person said any attempts to force a vaccine on Britons as the country returns to the new normal would cross a dangerous line in the sand.

They said: "Forced vaccinations will mark the transition of Britain from a representative democracy into a totalitarian technocracy."