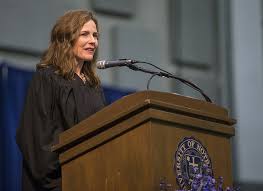 Republican senators are already lining up for a swift confirmation of Barrett ahead of the Nov. 3 election, as they aim to lock in conservative gains in the federal judiciary before a potential transition of power. Trump, meanwhile, is hoping the nomination will serve to galvanize his supporters as he looks to fend off Democrat Joe Biden.

An ideological heir to the late conservative Justice Antonin Scalia, Barrett would fill the seat vacated after the Sept. 18 death of liberal icon Ruth Bader Ginsberg, in what would be the sharpest ideological swing since Clarence Thomas replaced Justice Thurgood Marshall nearly three decades ago. She would be the sixth justice on the nine-member court to be appointed by a Republican president, and the third of Trump's first term in office.

For Trump, whose 2016 victory hinged in large part on reluctant support from conservative and white evangelicals on the promise of filling the seat vacated by the death of Scalia with a conservative, the latest nomination brings his first term full circle. Even before Ginsburg's death, Trump was running on having confirmed in excess of 200 federal judges, fulfilling a generational aim of conservative legal activists.