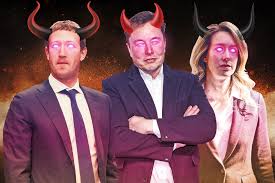 Gavet was chatting with an early investor at Uber and mentioned some of the disturbing news surrounding the company's co-founder and CEO, Travis Kalanick. There were revelations about spying on passengers, sexual harassment, a toxic macho work culture, and according to Kalanick's own friends, his "aspirational baller syndrome."

The investor, Gavet told The Post, just laughed and said, "Oh, no, he's so much worse than anybody knows." Gavet was nonplussed, asking the investor why he chose to do business with somebody so unrepentantly awful.

"He may be an asshole," the investor told her. "But he's my asshole."

This was just one of the many interactions that inspired Gavet to write her new book, "Trampled by Unicorns: Big Tech's Empathy Problem and How to Fix It" (Wiley), out Tuesday. Though Kalanick was ousted as Uber's CEO in 2017 and stepped down from the company's board of directors earlier this year, his psychopathic behavior is all too common among Big Tech execs, Gavet writes.