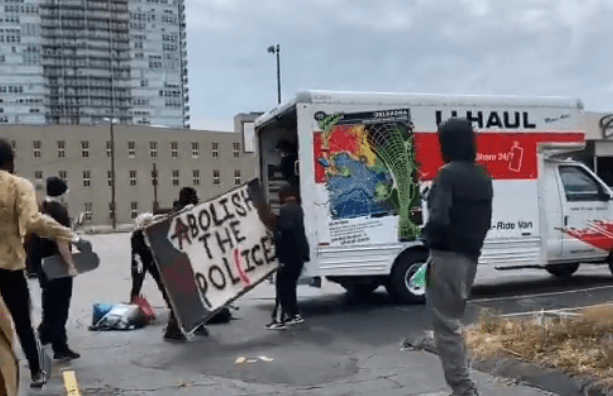 Holly Zoller, a "bail disruptor" for the Soros-linked Bail Project, rented and drove a U-Haul truck and handed out shields to potential rioters in Louisville.

The Bail Project is an organization that opposes cash bail, and claims that paying bail for those in jail is an "act of resistance against a system that criminalizes race and poverty." At least two employees of the Bail Project are or were "Soros Justice Fellows."
In June, Jack Dorsey teamed up with Rihanna's Clara Lionel Foundation to donate $11 million to organizations that "advance racial equity, with a focus on criminal justice and policing reform." The Bail Project was a recipient of these funds, along with Black Lives Matter.

The board of directors for The Bail Project, which pays to bail out people who destroy US cities and attack police, include Michael Novogratz, a financier, and Lisa Gersh, a high level media executive; advisors include British billionaire Richard Branson, actor Danny Glover, and singer John Legend. Essentially, the Bail Project pays the bail for people who destroy US cities and attack police. Tucker Carlson suggested that the wealthy are supporting riots to portray America's core problem as racial, but the real problems in the US are economic control by a small number of wealthy people.