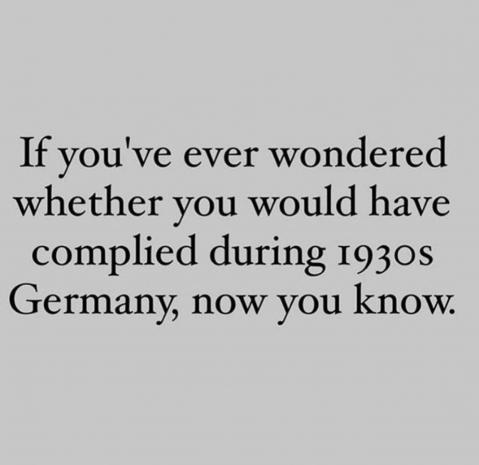 I shared some thoughts on Facebook this morning that I think are worthy of expanding on and sending out to you guys.

Here's what I wrote:

Milton Mayer was a Jewish American journalist of German descent who interviewed a variety of Germans, with different backgrounds and circumstances, to better understand how Nazism became a mass movement.

By the end of his project, Mayer observed that he could "see a little better how Nazism overcame Germany—not by attack from without or by subversion from within, but with a whoop and a holler."

"Each step was so small," one of Mayer's interviewees explained, "so inconsequential, so well explained or, on occasion, 'regretted,' that, unless one were detached from the whole process from the beginning, unless one understood what the whole thing was in principle, what all these 'little measures' that no 'patriotic German' could resent must some day lead to, one no more saw it developing from day to day than a farmer in his field sees the corn growing. One day it is over his head."

"Each act, each occasion, is worse than the last," he continued, "but only a little worse. You wait for the next and the next. You wait for one great shocking occasion, thinking that others, when such a shock comes, will join with you in resisting somehow."

You can see where this is going, right?

And here's where the interviewee lands his sucker punch at humanity:

"But the one great shocking occasion, when tens or hundreds or thousands will join with you, never comes. That's the difficulty. If the last and worst act of the whole regime had come immediately after the first and smallest, thousands, yes, millions would have been sufficiently shocked—if, let us say, the gassing of the Jews in '43 had come immediately after the 'German Firm' stickers on the windows of non-Jewish shops in '33. But of course this isn't the way it happens. In between come all the hundreds of little steps, some of them imperceptible, each of them preparing you not to be shocked by the next. Step C is not so much worse than Step B, and, if you did not make a stand at Step B, why should you at Step C? And so on to Step D."

Guys, are we paying attention?

I get that it's "dramatic" to compare things to Nazi Germany. I know that people from all political parties have made it a habit of calling every leader they don't like "Hitler" for so long that it's just kind of an "eyeroll" thing now.

But here's the thing. Hitler (and others like him) actually did rise to power. They actually did manipulate their populations into accepting their evil designs by small measures until they had the power to do the terrible things that they did. There's a reason we know the "frog in boiling water" analogy. There's a pattern wicked governments follow in bringing people into bondage and getting away with (literal) murder.

Are we paying attention? Are we heeding the warnings we're seeing?

Just yesterday I saw two stories that highlight how quickly things have slipped into something we as a country would absolutely not have accepted only eight months ago.

In Moscow, Idaho, several people were arrested for holding a "sing in" as a way to protest the Mayor extending an emergency order that the people feel is u

njustified. As I write this, Lataha County has had 377 total COVID cases, and zero deaths. This video shows the arrest of a couple who were simply singing with the rest of the peaceful demonstrators. Another, longer video, shows the couple's peaceful interactions with the two arresting officers in the moments before they were cuffed.

How are we here? When did this become okay?

Another video shows a woman at her child's grade school football game. She is sitting on the bleachers with her mother and kids. An officer approaches her for not wearing a mask (even though she is "socially distanced" from others and only sitting with her family) and an argument ensues between the woman and the officer.

The argument ends when the very small woman is tased. In front of her mom and kids. While exactly zero people make any move to stop what is happening.