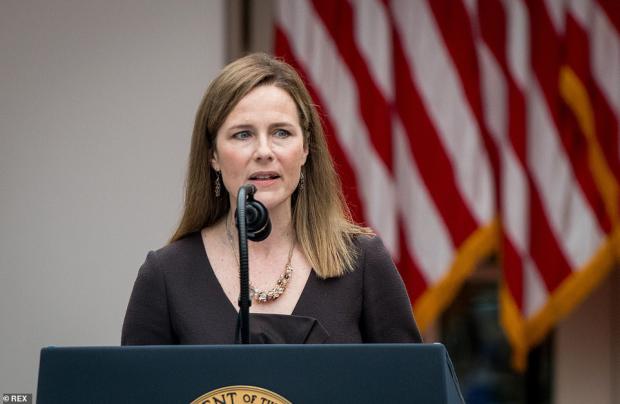 President Donald Trump nominated Judge Amy Coney Barrett to the Supreme Court on Saturday, capping a dramatic reshaping of the federal judiciary that will resonate for a generation and that he hopes will provide a needed boost to his reelection effort.

Barrett, a judge on the Chicago-based 7th US Circuit Court of Appeals and a devout Roman Catholic, has been hailed by religious conservatives and others on the right as an ideological heir to conservative stalwart Antonin Scalia, the late Supreme Court justice for whom she clerked.

Barrett said she was 'truly humbled' by the nomination and quickly aligned herself with Scalia's conservative approach to the law, saying his 'judicial philosophy is mine, too.'

'I was lucky enough to clerk for Justice Scalia. And given his incalculable influence on my life, I am very moved to have members of the Scalia family here today, including his dear wife, Maureen. I clerked for Justice Scalia more than 20 years ago, but the lessons I learned still resonate,' Barrett said.

'His judicial philosophy is mine, too. A judge must apply the law as written. Judges are not policymakers, and they must be resolute in setting aside any policy views they might hold,' she added.

Her praise for Scalia will surely rally conservatives and anger liberals as the Senate prepares for a fierce election year confirmation battle.