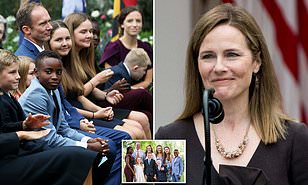 Barrett, 48, a married mother to seven and a former clerk to the late Justice Antonin Scalia, said she was 'truly humbled' by the nomination.

If confirmed Justice Barrett will make history as the first mother of school-age children to ever serve on the Supreme Court.

Barrett took the time to introduce her husband and seven children, who were seated in the audience, joking that it mades sense that Trump was nominating her to join a bench of nine justices.

'As it happens, I'm used to being in a group of nine: my family,' Barrett said.

Among Barrett's children, she has five biological and two who were adopted from Haiti.

Barrett's youngest biological son, Benjamin, has special needs after being born with Down Syndrome.

Barrett went on to tell the audience that in addition to being federal judge, she wears several other hats: that of carpool driver, birthday party planner, and recently, a teacher, as her children attended school remotely due to the pandemic.