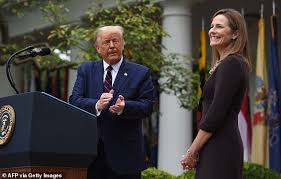 He also said it was 'definitely a time for a woman' to join the highest U.S. court

'Mostly, I'm looking for somebody that can interpret the Constitution as written,' Trump told 'Fox & Friends' in his first interview following the nomination

He predicted Sunday that the confirmation will be swift:  'I think it's going to be very hard to dispute her qualifications or anything about her'

Barrett has been a judge since 2017, when Trump nominated her to the Chicago-based 7th U.S. Circuit Court of Appeals

In accepting the nomination she established herself as a reliable conservative in the mold of late Justice Antonin Scalia, for whom she clerked in the late 1990s

Like Scalia, Barrett considers herself an 'originalist' and interprets the Constitution as she believes the authors had intended it during their own lives